skip to main | skip to sidebar

My friend writes of their life in Nebraska's Sandhills, which I hope you enjoy reading as much as I do.  She's funny and down to earth... no pun intended.  Their life could be called simple, only it isn't really.  It is a reminder of the hardships others endure without complaint and with humor.  Another friend writes of Australia's devastation and her efforts to keep a grip on that famous Aussie humor.

Winter Wonderland in Middle America
"Hi from a Winter Wonderland.  It's over 8 inches of new snow now, it covers some icy spots from last snow.  At least we have plenty of wood to burn, and a good supply on the porch.  Got out a few times last week to meet friends, and Hubby played his tuba at the Nursing Home too.  All we do now is chores, and haying, and grinding corn when feedlot needs it.  Glad we are gaining daylight in the evenings, and need sun to come up earlier in mornings."

Winter Wonderland in Southern America
Around 8" of snow fell yesterday in the Deep South, but unfortunately sleet and icy rain arrived soon after.  I put on boots and trekked through the snow to refill the feeders before breakfast - sleet was just beginning then.  Cherry-red cardinals made a bright splash against the white snow, and there were the usual winter holdovers like tiny finches, chickadees, etc.  An entire fleet flew in for the feast and entertained me all day.  There were even a few goldfinches that apparently had decided not to enjoy winter in south Florida.  Mourning doves dropped by later to pick up seed trash dropped on the ground. By early afternoon the snow was covered with ice and the little ones were either skating or skiing wherever there was a little slope and their tiny talons couldn't get a grip.  Too funny!

The old forest woods surrounding us provide homes and cover for birds and other wildlife.  My feeders are full anyway, but that dang renegade squirrel likes to horn in on their banquet.  WE are still at war!

Winter Not-so-Wonderland - Down Under
In may be summer now in Australia, but another friend in Brisbane writes of their winter horror - flooding beyond anything Australia has ever seen before.  Rivers that know nothing of banks, dams give way causing 26 ft of an inland tsunami, and coal mining shut down (depriving Asian steelmakers 75% of their coal needs).  However, my friend writes that the beloved Kookaburra birds are returning after several weeks of absence.  Their laughing sounds are helping my friend get past the pain of devastation.  Keep that Aussie sense of humor going, my friend! 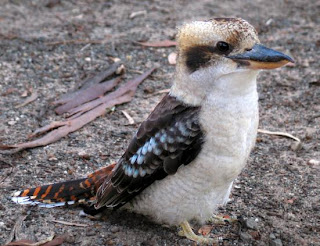 Moms Hugs (Eve)
Any Town, Middle America, United States
Thinking outside the box, ...but creatively inside.


JH I WILL by caseycarlsonx1

Marcel the Shell with Shoes On

Marcel the Shell - On Two